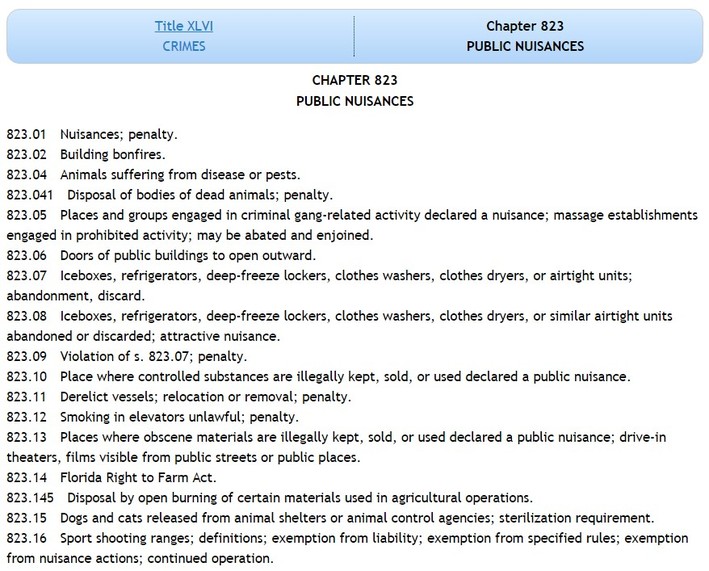 (3) DEFINITIONS.--As used in this section:

(a) “Farm” means the land, buildings, support facilities, machinery, and other appurtenances used in the production of farm or aquaculture products.

(b) “Farm operation” means all conditions or activities by the owner, lessee, agent, independent contractor, and supplier which occur on a farm in connection with the production of farm, honeybee, or apiculture products and includes, but is not limited to, the marketing of produce at roadside stands or farm markets; the operation of machinery and irrigation pumps; the generation of noise, odors, dust, and fumes; ground or aerial seeding and spraying; the placement and operation of an apiary; the application of chemical fertilizers, conditioners, insecticides, pesticides, and herbicides; and the employment and use of labor.

(c) “Farm product” means any plant, as defined in s. 581.011, or animal or insect useful to humans and includes, but is not limited to, any product derived therefrom.

(4) FARM OPERATION NOT TO BE OR BECOME A NUISANCE.--

1. The presence of untreated or improperly treated human waste, garbage, offal, dead animals, dangerous waste materials, or gases which are harmful to human or animal life.

3. The keeping of diseased animals which are dangerous to human health, unless such animals are kept in accordance with a current state or federal disease control program.

4. The presence of unsanitary places where animals are slaughtered, which may give rise to diseases which are harmful to human or animal life.

(6) LIMITATION ON DUPLICATION OF GOVERNMENT REGULATION.--It is the intent of the Legislature to eliminate duplication of regulatory authority over farm operations as expressed in this subsection. Except as otherwise provided for in this section and s. 487.051(2), and notwithstanding any other provision of law, a local government may not adopt any ordinance, regulation, rule, or policy to prohibit, restrict, regulate, or otherwise limit an activity of a bona fide farm operation on land classified as agricultural land pursuant to s. 193.461, where such activity is regulated through implemented best management practices or interim measures developed by the Department of Environmental Protection, the Department of Agriculture and Consumer Services, or water management districts and adopted under chapter 120 as part of a statewide or regional program. When an activity of a farm operation takes place within a wellfield protection area as defined in any wellfield protection ordinance adopted by a local government, and the adopted best management practice or interim measure does not specifically address wellfield protection, a local government may regulate that activity pursuant to such ordinance. This subsection does not limit the powers and duties provided for in s. 373.4592 or limit the powers and duties of any local government to address an emergency as provided for in chapter 252.