Here is a list of questions that many of our residents have that are not being answered as of yet. We continue to research to locate any reports that could answer some of these questions.

Per: http://www3.epa.gov/pmdesignations/faq.htm#0
Particulate matter, or PM, is the term for particles found in the air, including dust, dirt, soot, smoke, and liquid droplets. Particles can be suspended in the air for long periods of time. Some particles are large or dark enough to be seen as soot or smoke. Others are so small that individually they can only be detected with an electron microscope.

Roughly one out of every three people in the United States is at a higher risk of experiencing PM2.5 related health effects. One group at high risk is active children because they often spend a lot of time playing outdoors and their bodies are still developing. In addition, oftentimes the elderly population are at risk. People of all ages who are active outdoors are at increased risk because, during physical activity, PM2.5 penetrates deeper into the parts of the lungs that are more vulnerable to injury.
************* 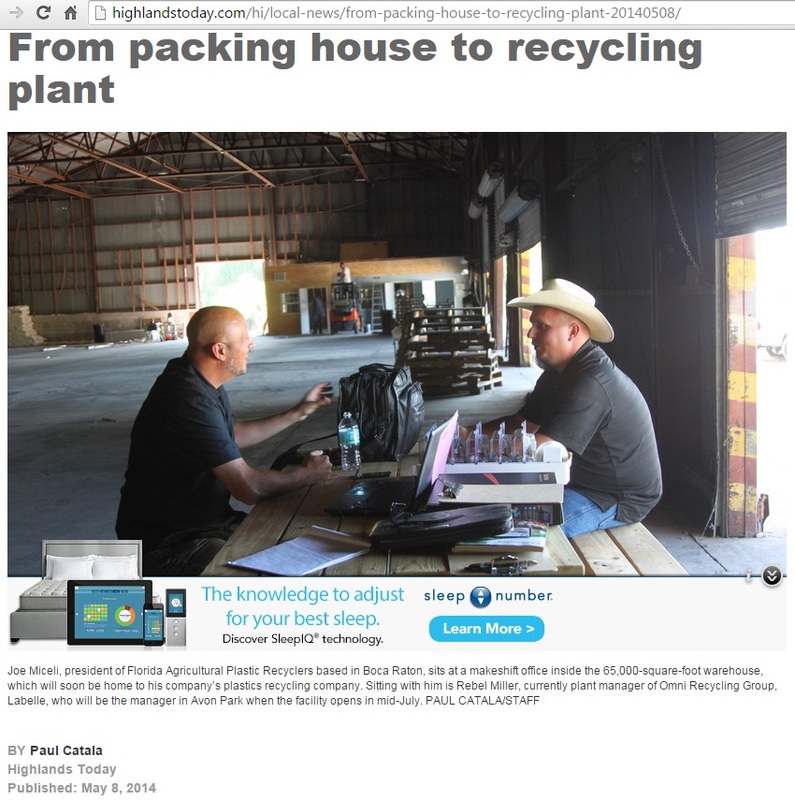 LINK
AVON PARK – Since it began as a packing warehouse in 1961 and through the early-1980s, thousands of oranges a day would roll on belts to be sorted, packed and shipped for the Ben Hill Griffin Inc. citrus company.

But after having different owners in the 1990s, the 65,000-square-feet industrial warehouse and plant has been empty.

That will all change within two months when Boca Raton-based Florida Agricultural Plastic Recyclers opens an agriculture-plastics recycling plant in the former citrus packing facility.

Located at 303 W. Lake Isis Ave., just west of north Central Avenue, it will be one the largest industrial operations to open in the city limits over the past two years.

During a stop at the facility Tuesday, company president Joe Miceli and plant manager Rebel Miller looked over the construction of a new plant office and spoke with a contracted electrician about installing electrical service banks.

Miceli, 43, said he and his staff are working hard to have the plant operational by mid-July to give Heartland farmers a more centralized location to bring used plastic products for recycling. Those include plastic covering used when seed is sowed on fields, particularly for strawberries and tomatoes.

Miceli said in Florida, the majority of those plastics are sent to landfills or burned, a legal disposal method in the state.

The company also owns a smaller, 10,000-square-foot plant recycling 30 million pounds of dirty agricultural film per year -- Omni Recycling Group, Labelle -- and he said he hopes to not only make a positive economic impact on Avon Park, but help as stewards of the environment.

Miceli said up to 40 million pounds of plastics per year from North Carolina south go to landfills and once recycled at his plant, those landfills would become less flooded with material that could be reused.

“They (farmers) saw what’s going into landfills, what we’re doing and saw it was a good business and good fit,” he said. “This is something that no one in the area really recycled.”

Once completed, the plant initially will have two plastics wash lines and be able to clean and sell almost six months-worth of agricultural plastics.

At present, the company “has agreements to sell over 40 million pounds” of the material to buyers around the world as well as “national retailers,” said Miceli.

Miceli and Miller said if all goes as scheduled, the company will add two more wash lines by the end of 2014 to completely utilize the company’s facility and accommodate the growth of recycled Low Density Polyethylene Film (LDPE) supplies.

According to Resource Recycling, the annual global production of virgin LDPE is about 50 billion pounds and Miller said the company would like to work with farmers around the southeastern U.S, to ensure that the film can be recycled and put back to work.

To get the company started and functioning, Miceli said about $1 million will have been invested. He said a group of Brazilian investors under the guidance of company CFO Youris Zubchevich funded the initial capital to open the plant.

With such a sizeable economic investment, Stephen Weeks, executive director of the Highlands County Economic Development Commission, said he foresees other industries -- such as one who re-fabricates the recycled plastics -- possibly being spawned from the company’s presence.

The facility will help the effort in recycling about 250 pounds of plastic per acre used in Florida’s tomato fields and 260 pounds in strawberry fields, said Gene Jones, CEO, Southern Waste Information Exchange, Inc., and sponsor of the 2014 Agricultural Plastics Recycling Conference & Trade Show to be July 20 to 22 in Marco Island. He said company would currently be the only facility of its kind in the state. A similar plant, Rko Industries in Labelle, closed about two years ago but another is being developed in Labelle by Recypoly Inc.

“I think all of the recycling options are fantastic and it’s really what’s needed to try and solve the (recycling) problems,” said Jones from his Tallahassee office.

Once the agricultural recycling plant is up and running, Avon Park City Manager Julian Deleon said it would be more evidence of the city’s economic ability to draw new business interests into its borders. He said it also showed the city’s current financial policies are working to encourage businesses -- small and large -- to look to locate or relocate into Avon Park.

“We are conscious that businesses have choices on where to locate. We’re pleased that Avon Park was selected. We are pleased with a new business that will have up to 20 jobs inside the city limits. I think this business, along with all the recent economic activity along Main Street, is very encouraging,” he said.